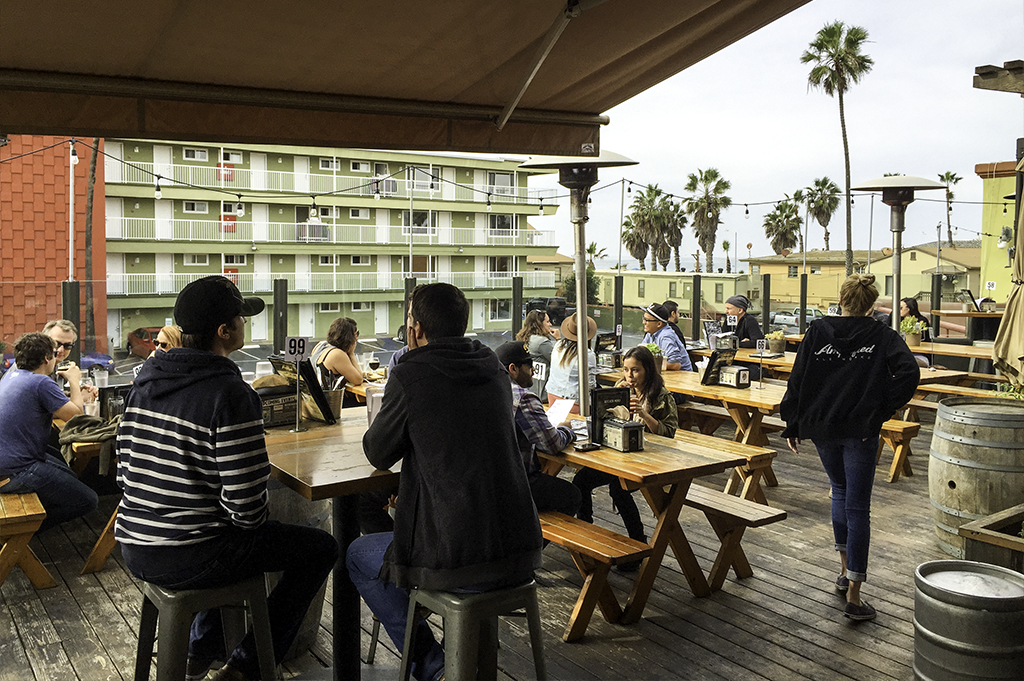 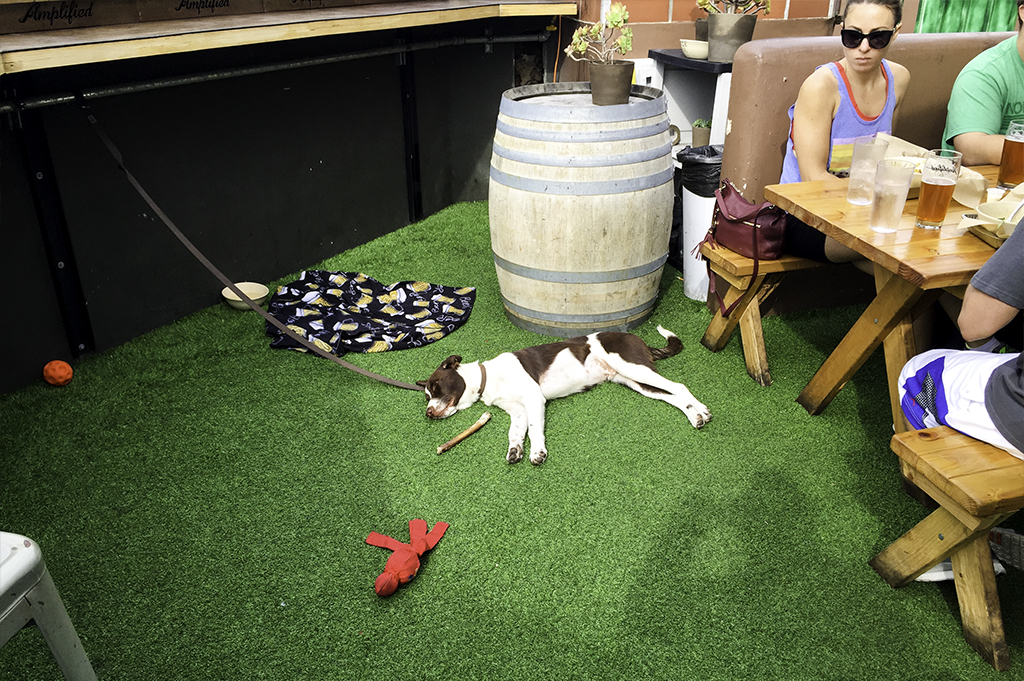 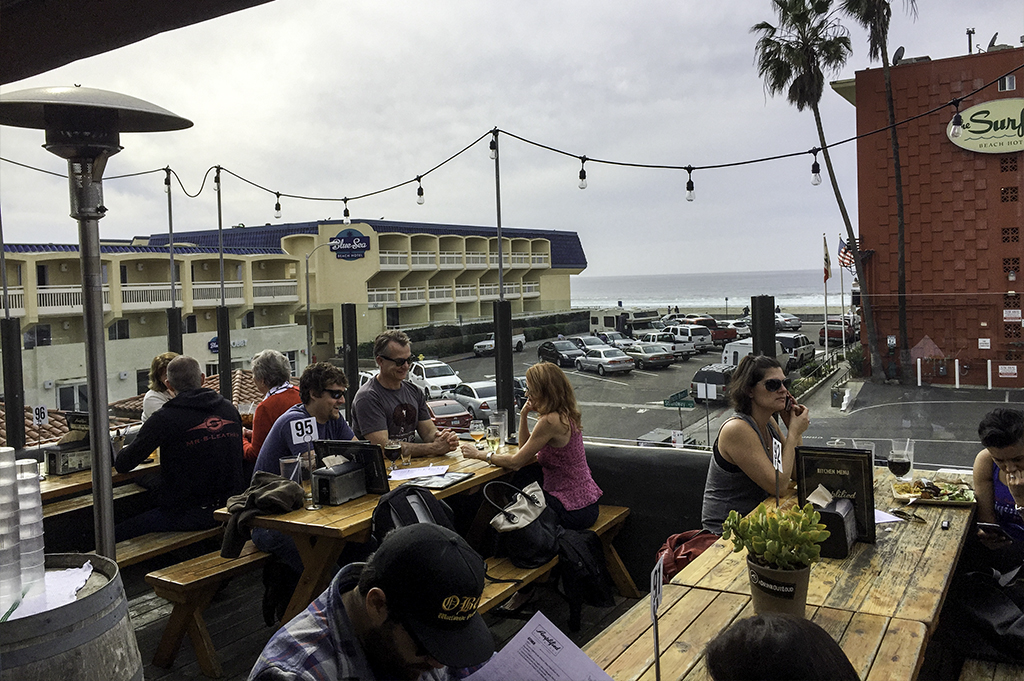 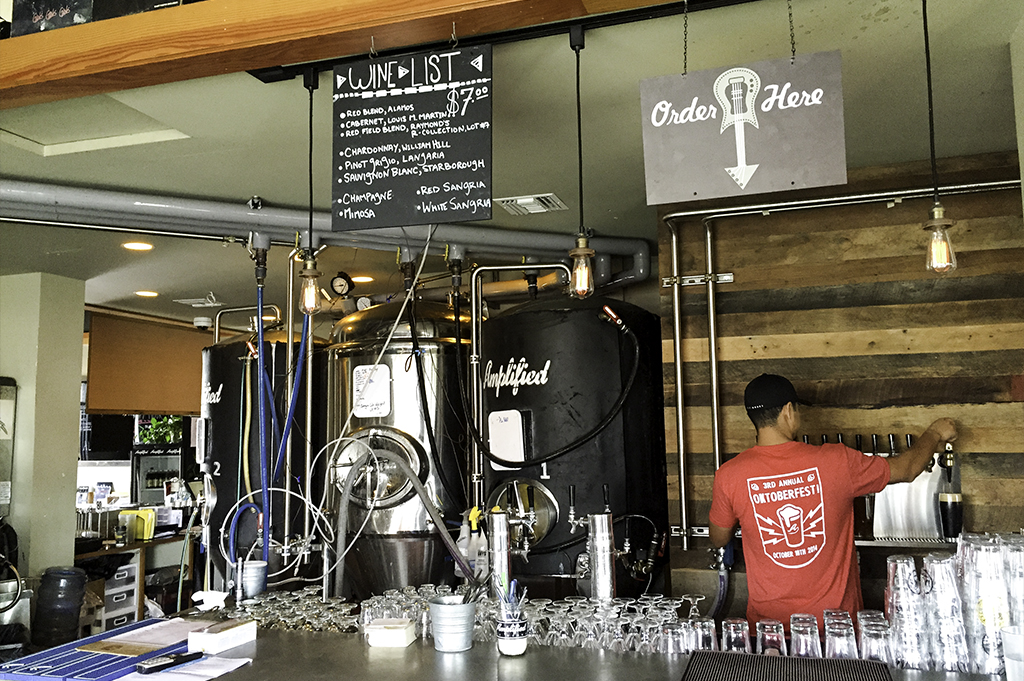 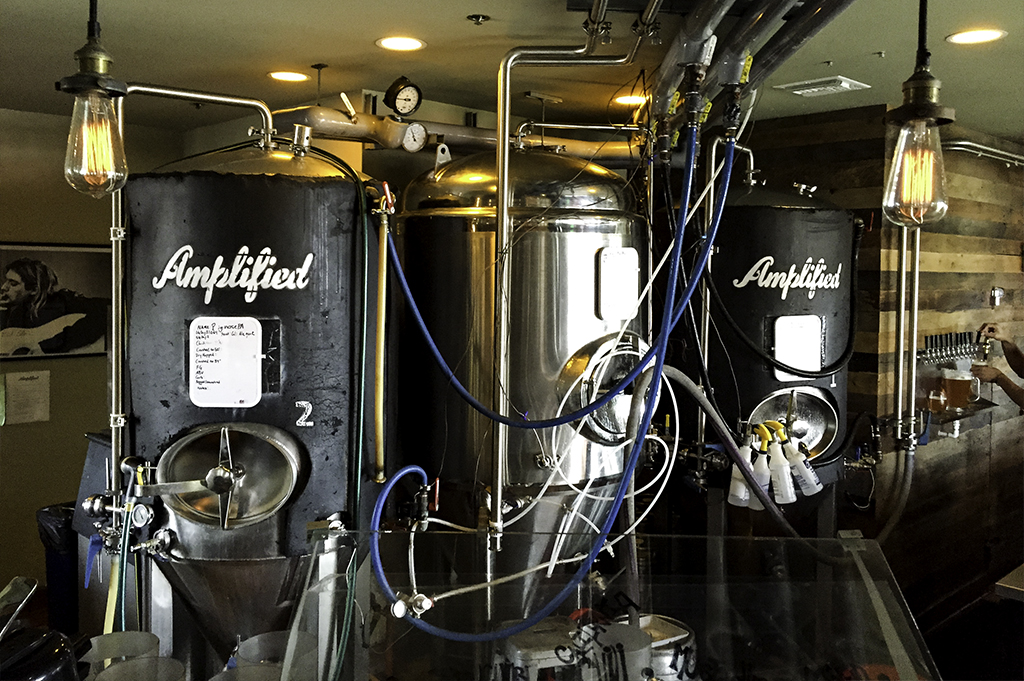 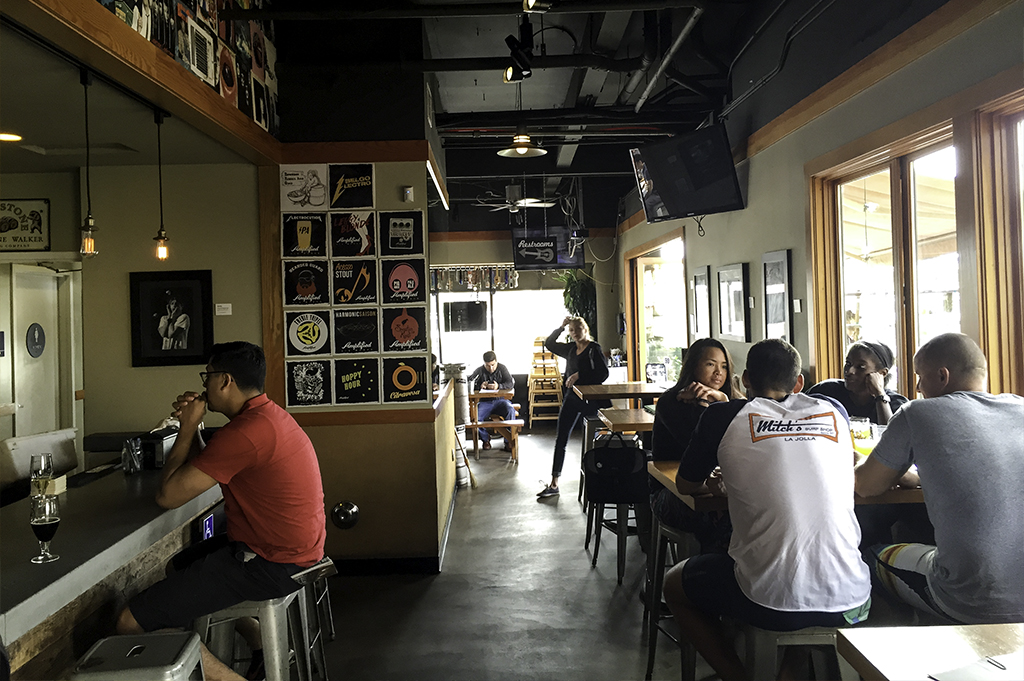 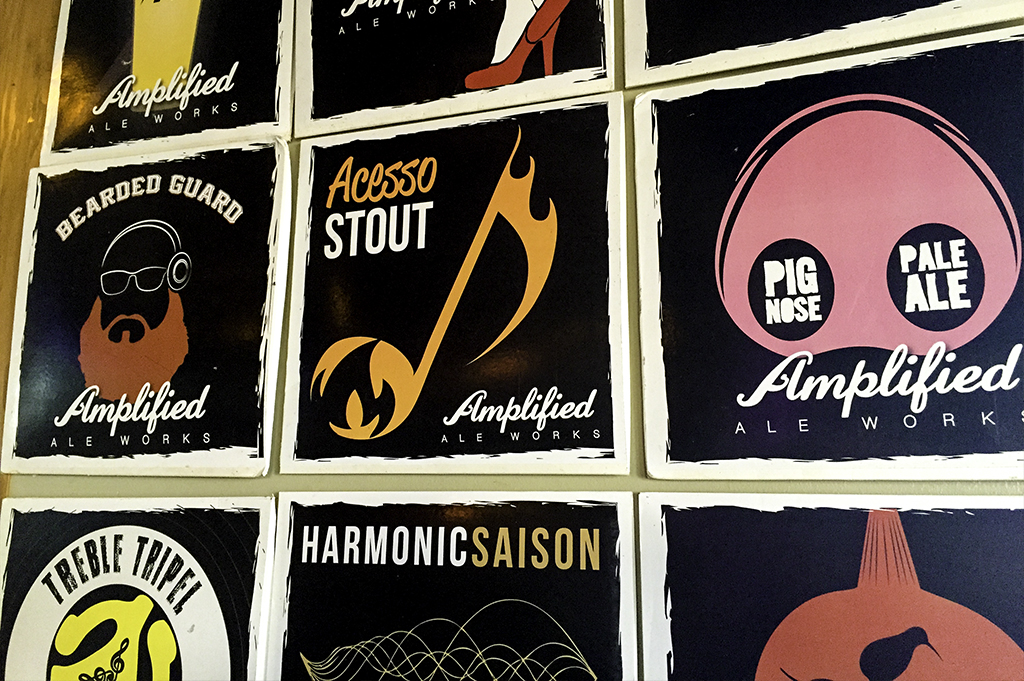 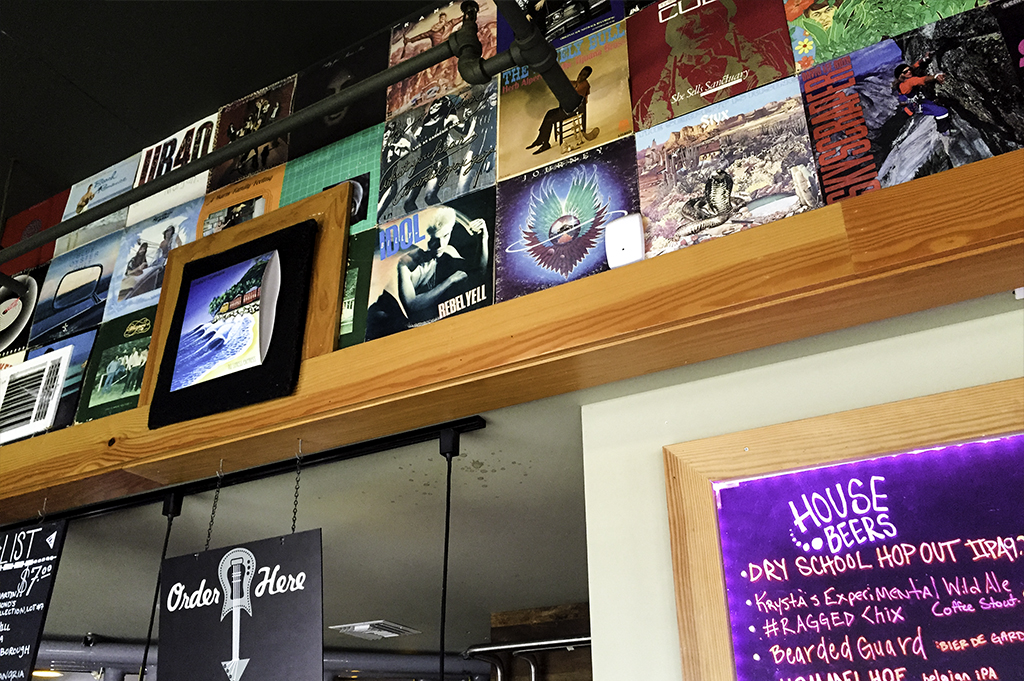 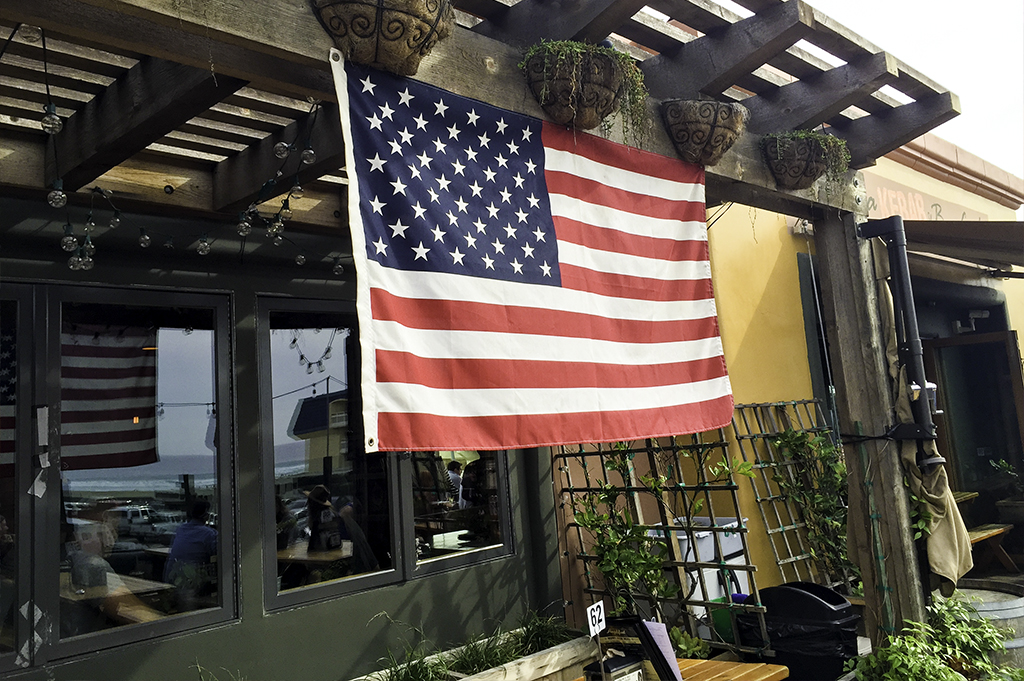 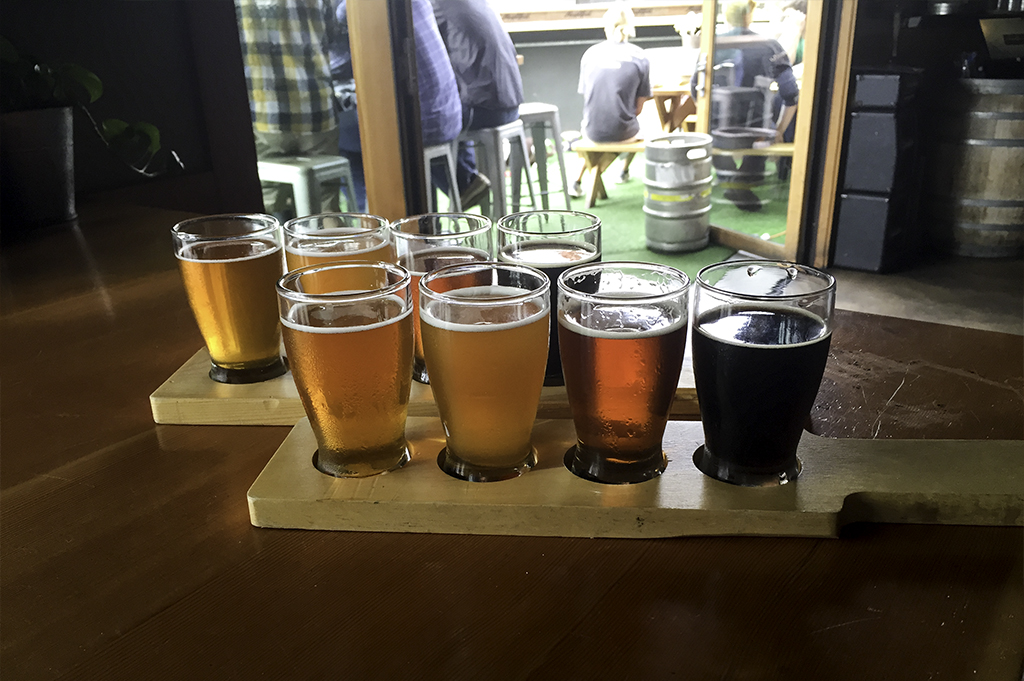 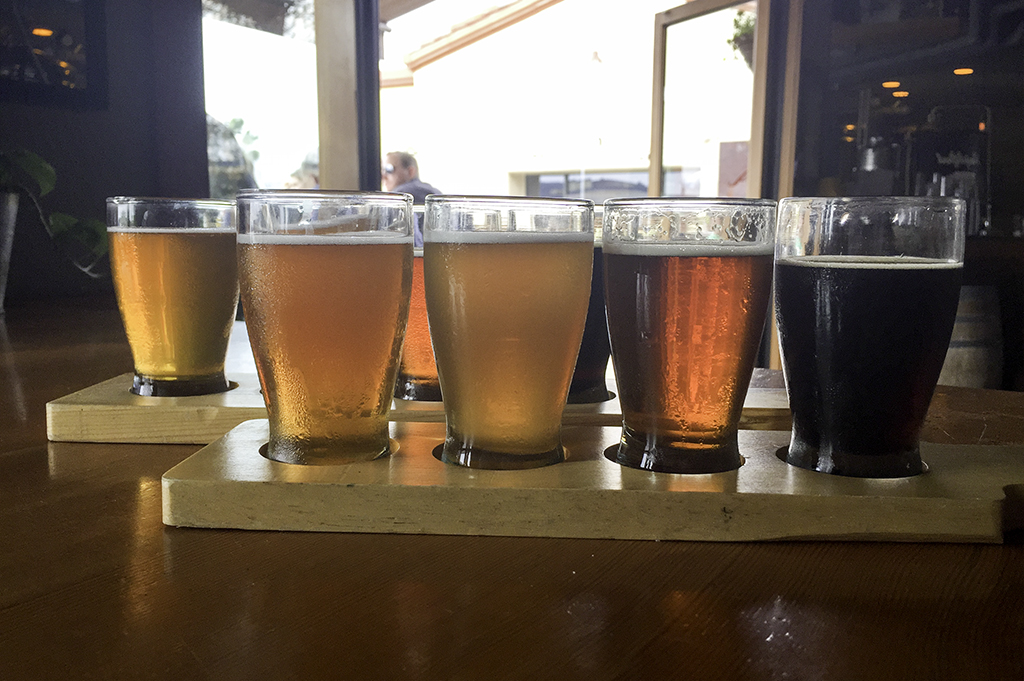 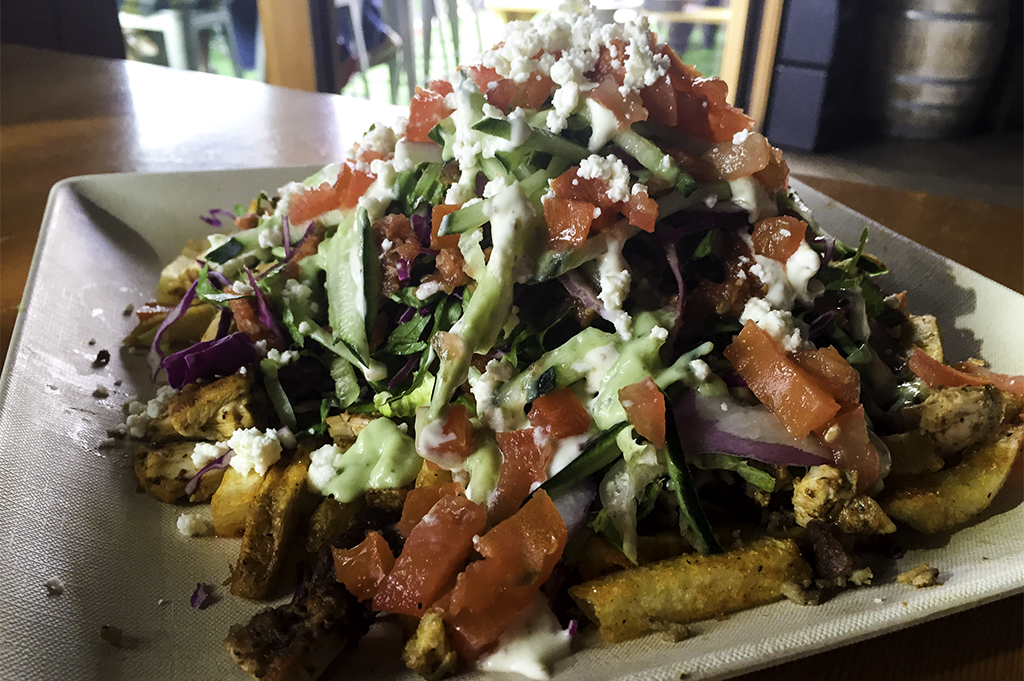 Amplified Kitchen & Beer Garden is located just a block off the beach across from the Catamaran Resort in Pacific Beach. For those who are not familiar with the area, it’s on the corner of Mission Blvd and Pacific Beach Drive, a prime location.

One thing I should mention is that they validate the parking from the parking garage underneath the plaza. Paid parking is abundant. So a visit to Amplified Kitchen & Beer Garden means you won’t need to deal with the parking problems Pacific Beach is famous for.

When I walked up to the front of the Plaza, I thought to myself, “Why aren’t there a ton of cool places here? There’s plenty of parking and prime real estate just off the beach.” Upstairs on the second level, the view is spectacular. There aren’t many places in Pacific Beach where you get access to a patio, an amazing view of the blue Pacific and local brews.

Right away, I knew that Amplified Kitchen & Beer Garden would be one of those stops where you take friends and family on their visits to San Diego. Keep in mind; I had decided this even before I sat down. That is how much I dig this place. As you can see in my photography, the vibe is amped up! The retro décor features cool album covers and rock ‘n roll art covers the walls.

Not only do they brew wonderful craft beers here, they also provide craft beers from other breweries in the city. It keeps getting better. There’s no need for food trucks; Amplified Kitchen & Beer Garden seems to be doing just fine on its own. The Donner Fries we enjoyed with our beers were unlike any other smothered fries I have ever tasted. I will have to return and let you know what the Good Eats are all about. Gladly…

ELECTROCUTION IPA
7.2% abv, 60 ibu, 5 srm
Style:
American India Pale Ale
Inspiration:
Before we even started brewing, we knew we wanted an IPA with an aroma that would literally knock people over and make them burp hops all day. To us, that’s an IPA worth seeking out. Therefore, we loaded the brew kettle with Citra, Amarillo, and Simcoe hops, and kept a simple grain bill of American two row malt and a touch of light crystal to showcase the hop aroma and flavor.
Tasting Notes:
Our flagship IPA features tropical fruit (lychee, passionfruit), citrus (orange), and a little bit of pine in the aroma, all of which disguise the bitterness as all you taste are pure hops. Pale gold in color, and light to medium in body, Electrocution is the quintessential hoppy San Diego IPA. Pair this with one of our skewer plates – goes extremely well with garlic pepper shrimp and pomegranate sirloin.
PIG NOSE PALE ALE
6% abv, 40 ibu, 7 srm
Style:
American Pale Ale
Inspiration:
While Pig Nose was originally an attempt to balance Electrocution with more malt character in the form of a pale ale, we can’t seem to shake our affinity to hops. While still very much hop forward, we use Northwest Pale Ale malt as our base malt along with a pinch of slightly darker crystal to complement a generous dosing of Columbus, Chinook, and Simcoe hops.
Tasting Notes:
Lots of dank, resinous pine and grapefruity citrus against a background of toasty, bready malt and subtle caramel. Pig Nose is a staff favorite, and is extremely versatile with food pairing! We recommend our classic Doner Fries with Lamb.
DRY SCHOOL HOP OUT
9.5% abv, 95 ibu, 6 srm
Style:
Imperial India Pale Ale
Inspiration:
Over the top, stupidly hoppy and not a trace of alcohol – that’s what wanted with Dry School. Turns out making a near 10% IPA is harder than we thought, and the first version was way boozier than it should have been. After a few recipe tweaks, we’ve got Dry School where we want it: an immensely hoppy, bitter beer that hides the alcohol, making it super drinkable.
Tasting Notes:
Bright tangerine and grapefruit in the aroma, and a rich malty flavor from British Maris Otter malt that complements the use of 6 different hop varieties. This beer should be enjoyed in a tulip glass, and should not be consumed in excess! Pair it up with a sirloin doner kebab.
BEARDED GUARD
6.6%, 25 ibu, 17 srm
Style:
Biere de Garde
Inspiration:
Rather than brewing a standard brewpub amber ale, we figured we’d try a Belgian style red ale in the form of a Biere de Garde, a maltier version of a saison. We use Belgian pale malt, dark crystal, and dark Belgian candi sugar to lend a distinct caramel richness. The Abbey Ale yeast translates toasty caramel into sweet, fruity esters, providing a truly unique twist on a red ale.
Tasting Notes:
Deep ruby in color, fruity esters in the aroma give way to biscuity malt, and flavors of fig, plum, and raisin. 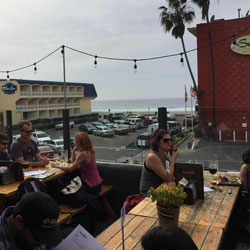