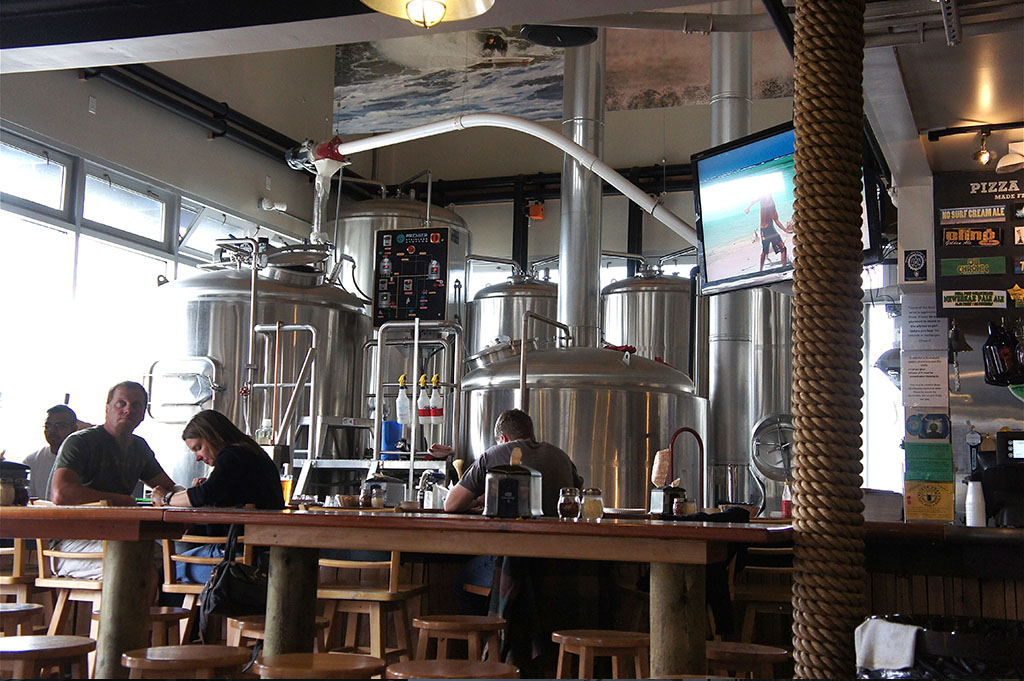 Back in March of 1987, Gina and Vince Marsaglia, a pair of siblings in their 20′s, bought a struggling pizza place in the sleepy coastal town of Solana Beach, just north of San Diego. From a funky storefront on the famous Pacific Coast Highway the duo ran the “Pizza Port” with a classic menu of pizza and chicken wings to which they added their own “San Diego” twist.

The parking was limited and the building crowded with simple hand-built picnic tables and a hodge-podge décor of surf-related paraphernalia almost at odds with the sophisticated flavors of the food. But word spread quickly and it wasn’t long before Pizza Port was a local favorite.

Early on, Vince took advantage of free space in the restaurant’s storage area to dabble with home brewing. The hobby took off and he was eventually brewing more than could reasonably be consumed at home. So at the urging of friends and fans, Vince and Gina decided to go into the brewpub business. Pizza Port offered its first craft-brewed beers to patrons in 1992.

Embracing the same “flavor-driven” principles that had made the pizza menu so popular, Pizza Port quickly gained a reputation in San Diego’s nascent craft beer scene. In 1997, the company opened a second location a few miles north of Solana Beach in Carlsbad, and a third in 2003 in San Clemente. The same year San Clemente opened (as well as the year after), the original location in Solana Beach won Great American Beer Festival “Small Brewpub of the Year”.

The Pizza Port family’s reputation for great foods and craft beer continued to grow, making them landmarks not just for Southern Californians, but for beer lovers from around the world.

In 2008, they opened a premium bottle shop with more that 600 craft beers adjacent to the Carlsbad locations, and by the end of the first decade of the 21st century, the Pizza Ports were a brewing dynasty. In 2009, the Pizza Ports won a staggering 9 medals at the 2009 Great American Beer Festival and Pizza Port Carlsbad was named “Large Brewpub of the Year”. Image

Not content to rest on past successes, Gina and Vince opened a forth Pizza Port in Ocean Beach in May of 2010.

Like the first in Solana Beach and all the Pizza Ports after it, it is just blocks from the beach and combines signature foods and handcrafted beers with the unique atmosphere of the beach town that surrounds it. More significantly, as the first location within the city of San Diego itself, this new brewpub finally put Pizza Port’s unique foods and handcrafted beers within minutes of millions.

In January of 2012, Pizza Port broke ground in Bressi Ranch, a community located within Carlsbad. Opening in June of 2013, the location houses a brewing facility, brewpub, commissary, and corporate office. Fans of Pizza Port and neighbors responded immediately to what’s held true for the past 26 years: having high quality beer, great pizza, and a fun environment for families to enjoy. This is the first location east of the 5 freeway, lending itself to reach die-hard fans living a little further inland. Notably, the location also has a canning line, where the company is finally able to have it’s core craft beers on store shelves across San Diego county!

Through all the growth and changes the company has seen over the past 26 years, what continues to drive our passion and our mantra still rings true:

Chronic Ale
4.9% Amber Ale
Historically brewed with hemp seeds, Chronic Ale has been a staple at Pizza Port for over a decade! This mellow amber ale is a house favorite at all our pub locations as it agrees with everyone’s palate and goes great with pizza.
Ponto
4.5% Sessionable IPA
Named after the southernmost beach and surf break in Carlsbad, Ponto truly embodies the spirit of the southern California lifestyle. Refreshingly light in body and low in ABV, there is a certain no sacrifice in hop character in this sessionable IPA. With a hefty does of American and New Zealand hops, this beer is bright and filled with hints of citrus, and tropical fruit.
Swami’s
6.8% American IPA
Swami’s IPA is a special beer to the Pizza Port family as it was the first IPA brewed in our original location over 20 years ago in Solana Beach. With a more traditional hop profile, this beer is the quintessential example of a West Coast IPA as it showcases the fresh bitterness of citrus and pine. Swami’s is named after the most famous surf breaking in San Diego county. 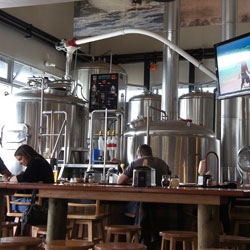