The USS Midway is now a museum ship located in the Embarcadero district of downtown San Diego. This historic aircraft carrier was decommissioned in 1992 and is now the only remaining U.S. aircraft carrier from the World War II era.

The USS Midway was once an aircraft carrier for the U.S. Navy. It was commissioned just a week after World War II ended so it never got to see any action in that conflict.  However, the Midway operated for 47 years. It saw action in the Vietnam War and served as the Persian Gulf Flagship in the ‘90’s Operation Desert Storm. I don’t want to give away all the details, but those are a few tidbits that you’ll learn on your visit.

I highly recommend you get the self-tour audio box which guides you through this large ship. It’s a great way to tour the ship without missing any important information.

I enjoyed getting a sneak peek at what a Navy recruit experiences on his tour of duty.  Seeing it first-hand gives you a new-found appreciation for all the sacrifices they make for our freedom.

So, if you enjoy history and more importantly, military history, then I recommend you check out the USS Midway in San Diego’s Embarcadero.  There are other historic ships offering tours here as well. Check them all out. You will be glad you did! 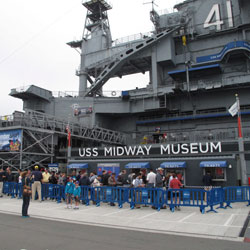